Updates: How to analyze the fundamentals of a company (with 3 sample case studies)


You would recall that we analyzed three scripts (MIC, Asahi India Glass and Prakash Industries) in July 2010 which is exactly 6 months ago (the link of original article named: How to analyze the fundamentals of a company (with 3 sample case studies)). The objective was only one to understand how to analyze the stocks from fundamentals investment perspective and nothing beyond that. I revisited these scripts to understand how they have fared after a gap of 6 months.

As per my analysis only MIC was qualifying that too at a level of 28 or below (that time it was trading at 40). MIC went to those levels sometime ago and bounced back exactly from that level in the recent fall. One of the comments I received was about MIC saying that will it ever go to 28 levels? My answer was if it does not then I am not interested in this, simple. If someone had bought at 28 then it would be a 21% return in 1 month or 257% return in a year.

Asahi India Glass has given superior performance over a period of last 6 months. I had mentioned two things in my mailer about Asahi: one, it has very high debt and second, its promoters have bought equity (a very small number but positive factor to the stock) in the recent past. I did not recommend this stock because of its very high debt. But the story in this stock can unfold further if debt restructuring is on the card. Prakash was the worst performer of the lot. Else this could be the handiwork of some operator so be careful. 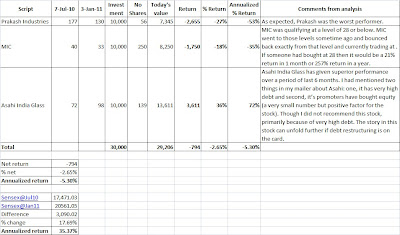 Look forward to receiving your replies.

IMPORTANT DISCLAIMER: Investment in equity shares has its own risks. Sincere efforts have been made to present the right investment perspective. The information contained herein is based on analysis and up on sources that I consider reliable. I, however, do not vouch for the accuracy or the completeness thereof. This material is for personal information and I am not responsible for any loss incurred based upon it & take no responsibility whatsoever for any financial profits or loss which may arise from the recommendations above.
Posted by Niteen S Dharmawat at 12:06 AM
Email ThisBlogThis!Share to TwitterShare to FacebookShare to Pinterest