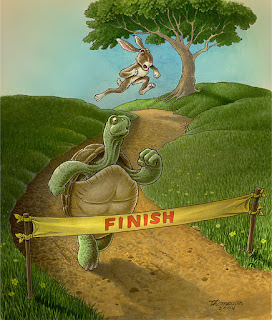 The answer to the quiz of 17th Jan 2017 is KNR Constructions. I received several responses. Many of you answered it correctly, some of you got confused it with J Kumar Infra (JKIL) and REC Ltd. But that’s ok. Many of you tried to find out the name of the company by matching the parameters. This process of learning was more important.

See Quiz: An investment story through a quiz

Why I got interested in KNR
I am always curious in the sectors “hot in demand”. These sectors show irrational beliefs and expectations of market participants. This has happened with ICT stocks (IT, Communication and Telecom) in the year 1998-2000. It has happened again between 2006-2008 period but this time with the stocks of Power, Infra and Reality sectors. They were all defying the valuation parameters. There was a mad rush to buy these companies as if there is no tomorrow.

During such time of over exuberance, many companies from the sector come into the market with their IPOs. However, they all burst one day when the greater fool theory does not work anymore or in simple words when the party is over. The way market behaves irrationally in the bull cycle giving huge valuations, it behaves equally irrationally to beat them down. This offers the opportunity to buy good companies with sound fundamentals, solid management and most importantly at attractive valuations.

KNR is one such company that I was tracking from Infra sector post its listing. This case study is with an objective of telling a story of a common investor, what he would go through once he goes against the tide. When the sector sees a burst, you would not have any takers, even if the company’s fundamentals are strong. It is with the objective of creating awareness towards basic research. In this case study, you would find that I have refrained from covering any complex financial numbers. But very basic work that may help you avoid the common mistakes.

KNR has a history of executing the infra projects before time and earning bonuses from the customers. This helps it in its EBITDA and Net profits. Also, the management has been very focused and conservative all these years. They have inventory of construction equipment (Gross Block of Plant & Machinery as of 30th Sep 2016 is 513Crs) with a complete management oversight on each and every project. KNR management never diluted their balance sheet by raising funds through say QIPs. The asset light model helped them avoid debt burden while they continued to grow modestly.

Let’s understand how this stock has performed over a period of time. How it tested my patience? 👀

Some of my earlier KNR posts:

The market measures the performance of a company from its performance in stock market. If you look at the below chart, it has the pricing of JP Associates, GMR Infra, IVRCL Infra, Punj Lloyd and KNR Constructions. The chart is drawn for period from Feb 2008 to 14th Dec 2016. It is fairly long period. All these companies are from the same infrastructure space and were the cynosure of the market in the yar 2008.

While most of the companies from the same sector lost anywhere between 95-98% of investors wealth, KNR returned 480%. In simple words a Rs100 invested in IVRCL Infra in 2008 has become Rs2 as of today. While the same Rs100 invested in KNR in 2008 has turned out to be Rs580.  Market recognized the potential of KNR only after year 2014 and then we have seen how “smart investors’ (read FIIs/MFs) started pouring in their money in KNR.

Please share your feedback. I look forward to receiving your response.

Some additional material that my help you in identifying your own multibagger rather than getting dependent on the tips. Remember “Tip takes you to Pit, the reverse of Tip”.


IMPORTANT DISCLAIMER: Investment in equity shares has its own risks. Sincere efforts have been made to present the right perspective. This presentation/material/email/blog write-up does not give any buy/sell/hold recommendation directly or indirectly. The details should not be concluded as a recommendation for buy/sell/hold. It does not give any price targets. This is with the sole objective of taking feedback from the readers/viewers. The information contained herein is based on my study and upon sources that I consider reliable. I, however, do not vouch for the accuracy or the completeness thereof. This material is for personal information and not intended for any investment decisions. I am not responsible for any profit or loss incurred based upon it & take no responsibility whatsoever for any financial profits or loss which may arise from the discussion thread above/anywhere in communication. It is safe to assume that I, my family, friends have vested interest in any of the stock ideas discussed here and we reserve the right to take an opposite position to what we have today. Please do your due diligence and take the help of a qualified investment adviser and a registered equity analyst before you make any investment decisions. I am neither of these.

Posted by Niteen S Dharmawat at 8:06 PM
Email ThisBlogThis!Share to TwitterShare to FacebookShare to Pinterest

Thanks for sharing your experience, and interesting insights.

Great analysis. It sort of shows the value proposition in fundamental analysis, value investor's perspective and delineates investment from trading. Few days back, I had an argument coming from a young laddie, just trying to make out in the back office of some investment bank. The subject was about fundamental analysis vs. technical charting. As much as I tried to avoid the subject , knowing the shallow response I would need to prepare myself for, the laddie was insistent and cocky. I had to at the last tell him that you know what you first now need to differentiate between the two: if not, then this discussion is a wastage of time. Secondly, with all due respect in contrast to fundamental analysis , technical charting is a bit of quackery. I know I am making a very bold statement and am risking a few irksome comments from the die hard fans of technical charting, but the blow was important for the laddie to nip him then and their. Not that I don't enjoy a good debate but it is a little far fetched and clearly a drag to argue with the cynics. The reason for this long discourse is definitely not to prove the superiority of fundamentals over technicals-but to reinforce Nitin's own long journey based on his analysis, conviction and patience.

Dear Niteen,
Great analysis on KNR...I am too bullish on this company and infra as a sector. Your earlier post also has done great justice to the infra sector...Could you also guide me on your views for PNC Infratech... I believe this can be the next KNR...Look forward for your views. Thanks

Dear Vandan,
I do not track PNC Infra. However, few more friends asked my opinion. I am just reproducing what I said.

PNC Infra has some recent corporate developments that are not giving me confidence. Two directors resigned.

Also, Enterprise Value is around 5200Crs is not cheap. The margin of safety is not very high. Their expansion in power sector is not a welcome thing. They have listed two projects on the site. I am not sure about the current power projects in hand and their focus on the sector. If they are pursuing this, I would like to be cautious about it. Also, I am not too sure about the success of Hybrid Model of Road Development and how it is going to further stretch the balance sheet of the company. (Extract from what I wrote on valupickr in Dec before directors of PNR resigned)

Great analysis Niteen. Is KNR still worth a buy at current levels?

I thought I would leave my first comment. I don’t know what to say except that I have enjoyed reading. Nice blog, I will keep visiting this blog very often.

When someone writes an piece of writing he/she keeps the image of a user in his/her
mind that how a user can know it. Thus that's why this article is
outstdanding. Thanks!

Hi what a good entry level in your opinion?

Exceptional read, I simply passed this onto a good friend that
was doing some research study on that. Additionally, he really bought
me lunch as I located it for him. Maintain composing as well as helping people!

Good blog you've got here.. It's difficult to find high-quality writing like yours these days.
I really appreciate people like you! Take care!!

Dear Abhishek bhai your love for fundamental is okay. But technical is not quackery.